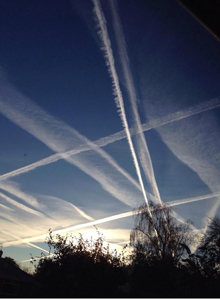 It is truly amazing what we human beings in this not very conscious age are able to get used to.  The high altitude spraying of toxic metals and other poisons right over our heads worldwide almost every day is not the only threat to our existence on this planet.  It’s not even the only threat of immediate urgency, there are many others.  But it is definitely one of the most obvious.  If the majority of people had any of their common sense still intact, and the basic intelligence to understand what is a condensation trail and what is a particulate trail (it’s not hard to tell the difference at all), we would all know we were under deadly air assault from our own “leaders” who are supposed to be working for us, not against us.

But unfortunately most of us are still walking through life seeing the world as interpreted by mainstream television, where all authority figures are benevolent, well, maybe not in the “bad” countries (like the ones the US government and its allies invade and bomb, or occupy all over the world), but certainly in the US where we have the government doing all it can to keep us safe and free.  The blindness is so deeply ingrained that most of us do not even see the air raid in progress over our own soil almost every day.

Yet it is unquestionably there and is methodically destroying the natural climate of the planet, the soil and water, the delicate balance of life and the entire biosphere.  This is not being done by mistake, or in some misguided effort to save us from “climate change” or global warming.  High definition photographs of the spraying going on, starting and stopping, military whistleblower testimony, even statements of a few chemtrail pilots, and patents for exactly what shows up in the sprayed areas in tests of soil, water and air, all leave no room for reasonable doubt that the daily runs of these toxic bombers intend to destroy our life support system called Earth.

One of the main things that acts as camouflage for this crime against humanity is the inability of programmed people to even imagine that this kind of malice could be going on at the hands of our own governments, with their global corporate partners.   But it is, so we have a problem.

And though the spray flights are an obvious assault right in front of our eyes, the same people that are directing the spraying, at the top levels of the power structure are also directing the destruction of our world in a myriad of other ways at the same time.  The biotech industry, the nuclear power industry, the agricultural chemical industry and the medical drug industry are just a few examples of the multi-pronged attack against humanity, masquerading as benevolent programs that are “scientific” (in the modern, degenerate sense of the word) and for our own good, devised by experts who care about us.  And yes, actually it’s true, they do care about us, much like a patron at a fancy restaurant might care very much about his or her steak and lobster dinner.

Stopping any one of the programs to destroy us, even “geoengineering” (the supposedly impressive and scientific term for this crime) would not do the trick.  They have to all stop.  And to do that, the people directing them will have to stop all that they are doing in these programs.  I don’t think that will be accomplished by force, though those in power are hoping we will try that route, for which they are well prepared.  They have the technology and weaponry to destroy us all quickly if we become too problematic and no more subtle approach will work.

To succeed at this challenge, it will take at least a small but committed group of people capable of understanding and acting on principles that are more subtle, but much more powerful and capable of creating positive change that could spell the end of the entire negative agenda.

As human beings, we are far more than we have been led to believe.  Our real potential still lies deeply hidden, on levels most of us do not know exist.  There are levels we used to have access to that we can find again.  Those with negative intent are barred from entry there.  But so are we (barred by our own ignorance), as long as our own unconscious state keeps us looking in the wrong direction.  This is why the top priority of our captors/rulers is to keep us asleep while they complete their programs, whatever it takes.

Will we sleep through the rest of this drama and let them take us the rest of the way down?  Or will a wave of awakening sweep across our world, bringing at least some of us back to a level where we can reclaim our world in its pristine beauty, and no resistance from those who wish us ill will be possible?  As things stand now, it appears we will have the answer to this question soon.  “Getting mad,” in this situation, will not cut it.  This is a much more serious challenge that we cannot meet without a significant consciousness change.  We need to learn what that means.  And right now would not be too soon.

Geoengineering, A Clear And Present Danger
More in this category: « Puerto Rico DIRECT HIT By Hurricane Maria… Interview With Dane Wigington Reveals "Weather Weaponization" May Be The Culprit 3/22/15 - Question Everything »
back to top