Effects Of Electromagnetic Radiation On Mitochondria 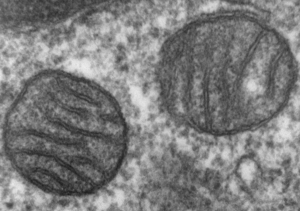 Wireless communications have increased significantly in modern times and concerns regarding their safety have grown as well. Wireless communications utilize high frequency radiation – radio frequencies and microwaves. Man-made electromagnetic radiation exerts numerous biological effects that begin at the molecular level and eventually lead to cellular, tissue and organ dysfunction. Electromagnetic radiation exerts its effects at the sub-cellular level by altering molecular rotation and vibration, increasing the collisions between molecules and breaking chemical bonds which ultimately affect structure and function (1). This has direct effects on energy production in the cell. Mitochondria are the organelles responsible for cellular energy production and numerous other cell functions and they are adversely affected by electromagnetic radiation in many inter-related ways.

Oxidative stress and disturbed cellular signaling is caused by electromagnetic radiation. Oxidative stress occurs when there is an imbalance between free radical production and anti-oxidant defense mechanisms. There is a significant increase in reactive oxygen species, decreases in antioxidant enzymes glutathione peroxidase and superoxide dismutase and markers of lipid peroxidation and protein oxidation increase (1) when mitochondria are exposed to radiation. Radiation inhibits the mitochondrial respiratory chain by prolonging the lifespan of free radicals and impairing the anti-oxidant defense system (2). Enzyme functions and signaling pathways that are crucial to energy generation are disturbed by electromagnetic radiation. As mentioned above, calcium homeostasis is impaired and calcium is an important signaling molecule. The activity of cytochrome c oxidase, a critical enzyme in energy metabolism which transports electrons to oxygen to produce water and ATP, is suppressed (1). Oxidative stress and impaired signaling also affect mitochondrial gene expression.

Apoptosis increases after exposure to electromagnetic radiation (4). Exposure to radiation triggers a series of inter-related events – structural damage, impaired signaling, oxidative stress and gene mutations – that culminates in cell death. The cumulative damage causes an imbalance of pro-apoptotic and anti-apoptotic proteins which leads to a decrease in the mitochondrial membrane potential (4) and the release of cytochrome c which activates caspase-signaling pathways that lead to apoptotic cell death (1, 4). Although apoptosis may be beneficial in removing damaged cells, when it is excessive, it can be problematic because it can eventually lead to systemic dysfunction in the organism.

Excessive apoptosis caused by man-made electromagnetic radiation is problematic for the nervous system. The nervous system is very susceptible to the effects of radiation. The brain is more sensitive to electromagnetic radiation than other organs because it has a very high metabolic rate and a great demand for oxygen, making it very vulnerable to energy metabolism disorders (1). Numerous pathological changes can occur in the brain as a consequence of excessive radiation exposure such as structural damage, neurotransmitter disruption (1, 3), altered electrical activity and increased permeability of the blood-brain barrier (2, 4). How severely one is affected depends on the frequency, duration and intensity of the radiation exposure (1, 3). Everyone is or will be, in some way, negatively affected by man-made electromagnetic radiation. Because of the ever increasing amount of antennas and towers being installed by telecommunications companies, radio frequency and microwave radiation is nearly impossible to avoid nowadays and it poses a serious threat to public health. It will only get worse unless action is taken to remove and reduce and not simply avoid the sources of man-made radiation.

Tweet
Published in Articles
More in this category: « 'US Is Defending ISIS': Russia Convenes UNSC Meeting After US Coalition Strike On Syrian Army List Of Airlines Offering InFlight Wi-Fi »
back to top