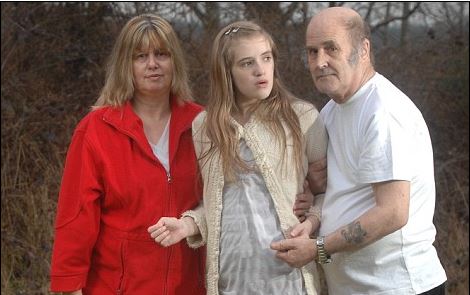 On May 17, 1993, Mr. and Mrs. Marchant took their daughter, Jodie, to the doctor for her 14-month check-up. Jodie was fit and healthy and meeting all her milestones, so her parents agreed for her to be vaccinated with the MMR vaccination, a decision that will haunt them forever. Mr. Marchant explained to us what happened the moment that Jodie received her vaccination:

Jodie let out a high-pitched scream and appeared to be in a state of shock. Her eyes became vacant as if in a trance and she appeared to lose interest in eating and refused all food and we had to resort to giving her milkshakes. Jodie did not recognize anyone for a long time. Note, in 1997, her then-GP was able to confirm that Jodie was okay prior to vaccination and this confirms the records were available when the GP INSPECTED THEM.

Jodie stopped movement and would sit on the sofa rocking with eyes rolling and stopped talking.

It appears that instead of receiving the MMR vaccine, as agreed, Jodie received a mystery vaccination, because according to her medical records, she received a combination of the following vaccinations: diphtheria/tetanus (DT), polio, pertussis, and the MMR 11.

There was also a mention of the Hib vaccination being given, a vaccine against Haemophilus influenza type B.

Furthermore, her parents have stated, that when they entered the doctor's surgery, they were shocked to discover that the vaccination had been prepared by their doctor in advance. 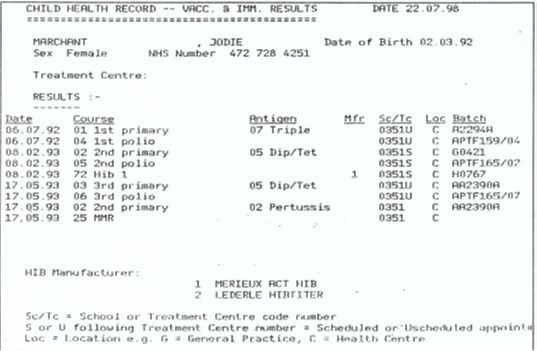 Doctors Found Guilty of Mixing Several Vaccines Together in One Syringe

If what her parents are saying is true and Jodie did only receive one shot on the day she was vaccinated, then we need to consider whether or not Jodie's doctor decided to mix several vaccinations into one syringe without her parents' knowledge or consent.

Whilst the majority of us would consider this to be not only unethical but also highly unlikely, remarkably, it is a possibility because, in 2013, the Globe and Mail reported that a pediatrician from Halifax was found guilty of doing the unthinkable.

Dr. William Vitale had a habit of mixing vaccines into a single syringe rather than administering them separately, and as many as 500 children will have to be re-vaccinated.

For example, at a year old, babies receive a four-in-one vaccine – measles, mumps, rubella, and varicella – along with two other vaccines to protect against meningococcal disease and pneumococcal disease. Dr. Vitale told investigators at the Nova Scotia College of Physicians and Surgeons that he mixed the three shots in one syringe to reduce the number of needles children would get.

What is even more shocking is that this doctor is not alone in his actions. In 2016, the Guardian reported on an equally disturbing story:

Regulators have suspended the license of a doctor in Chicago who allegedly gave patients modified vaccinations containing cat saliva and vodka.

They found a cluttered, unsterile office and 'a box filled with vials and tubes that [Lin] was using to make his own vaccinations.'

Lin told investigators he had been preparing alternative vaccinations for children for more than a decade, according to the order.

Despite his unapproved methods, Lin is accused of signing state forms certifying he had given pediatric patients their conventional shots. Charts showed the patients who received unapproved oral vaccines included a seven-day-old infant.

In fact, reports such as these are not as rare as we might imagine. During a now-censored YouTube video, the developer of Merck's vaccine program, Dr. Maurice Hilleman, was filmed openly admitting that whilst working for Merck, the polio vaccines had been deliberately contaminated with SV40, a cancer-causing monkey virus from 1953-1963.

Although the original clip was censored, other copies are still in existence.

Do We Actually Know What Our Doctors Are Vaccinating Us With?

In 2015, VacTruth reported on the story of Alisa Neathery, a mother who took her six-month-old unvaccinated baby, Bently, to the doctor to be examined for the first time. However, instead of treating Alisa with respect, the medical personnel emotionally blackmailed her into having her baby vaccinated with a lethal combination of 13 vaccines.

Prior to the shots being given, when the doctor was discussing the pros of getting vaccinated with me, he explained how he was from a village in Africa. That we were lucky in America to have the opportunity to receive vaccines because where he was from, the mothers had to have like 11 kids each since most would die off from disease because they were not as fortunate to receive vaccines like we are here in America. He really pushed them on me hard. He spent a lot of time convincing me to give Bently the vaccines, but when it was done, we never saw the doctor again.

The report stated that:

Bently's doctor decided to vaccinate this previously unvaccinated baby with a total of 13 vaccinations in one day, in what can only be described as a bid to catch up.

Bently was also given three other vaccinations, which appear to be unidentified on his vaccination card, plus the hepatitis B vaccine and oral polio vaccine.

Jodie's Parents Had Only Consented to the MMR Vaccine

Jodie is now 25 years of age; she has no language, is doubly incontinent, still drinks from a bottle and suffers from a variety of disabilities similar to autism. Her parents have received no apologies, no compensation and no help for their disabled daughter. They believe that their case hinges on the following facts:

1. They did not give their consent for her to receive any vaccine other than the MMR.

2. They did not have sufficient information on this vaccination to make an informed choice on whether or not they wanted their daughter vaccinated with anything other than the MMR, which, according to the Montgomery Ruling, they must receive in full.

3. By vaccinating Jodie with multiple vaccinations without her parents' consent or knowledge, her doctor committed an offense which was a breach of both Jodie's and her parents' human rights.

I have met this family and have received their paperwork and I found the reports to be full of inconsistencies.

Jodie has "a very odd sitting posture, she tends to sit and rock and makes gestures with her hands."

As you can see, each one of these statements states something entirely different and these inconsistencies continued throughout the paperwork.

Although the report did ascertain that Jodie suffered from autism, the report then stated she was not eligible for compensation from the Vaccine Damage Payment Unit, because after reading the medical evidence, it was not accepted that Jodie had been damaged by the vaccination. However, Mr. Marchant believes that this is not the case and his views were reiterated by Dr. Warner. from Southampton, who stated:

Jodie is one of the most disabled adults I have met and this family has been left penniless and alone to cope. This case is even more tragic when you see the photos and reports of Jodie before she was vaccinated. Jodie was a healthy normal little girl who before vaccination was meeting all of her milestones.

In fact, her general practitioner, Dr. Jennifer Greenland, stated this in a letter addressed to Dr. Andrew Wakefield and his team. The letter stated:

"Her diagnosis of autism was confirmed in May 1996 after a full assessment."

Her words were repeated by Dr. Walker-Smith's return letter, which stated:

"…then she stopped eating, started screaming and lost what words she had."

Throughout his report, he makes it clear that, in his professional medical opinion, Jodie's injuries were caused by the vaccinations that she had received. 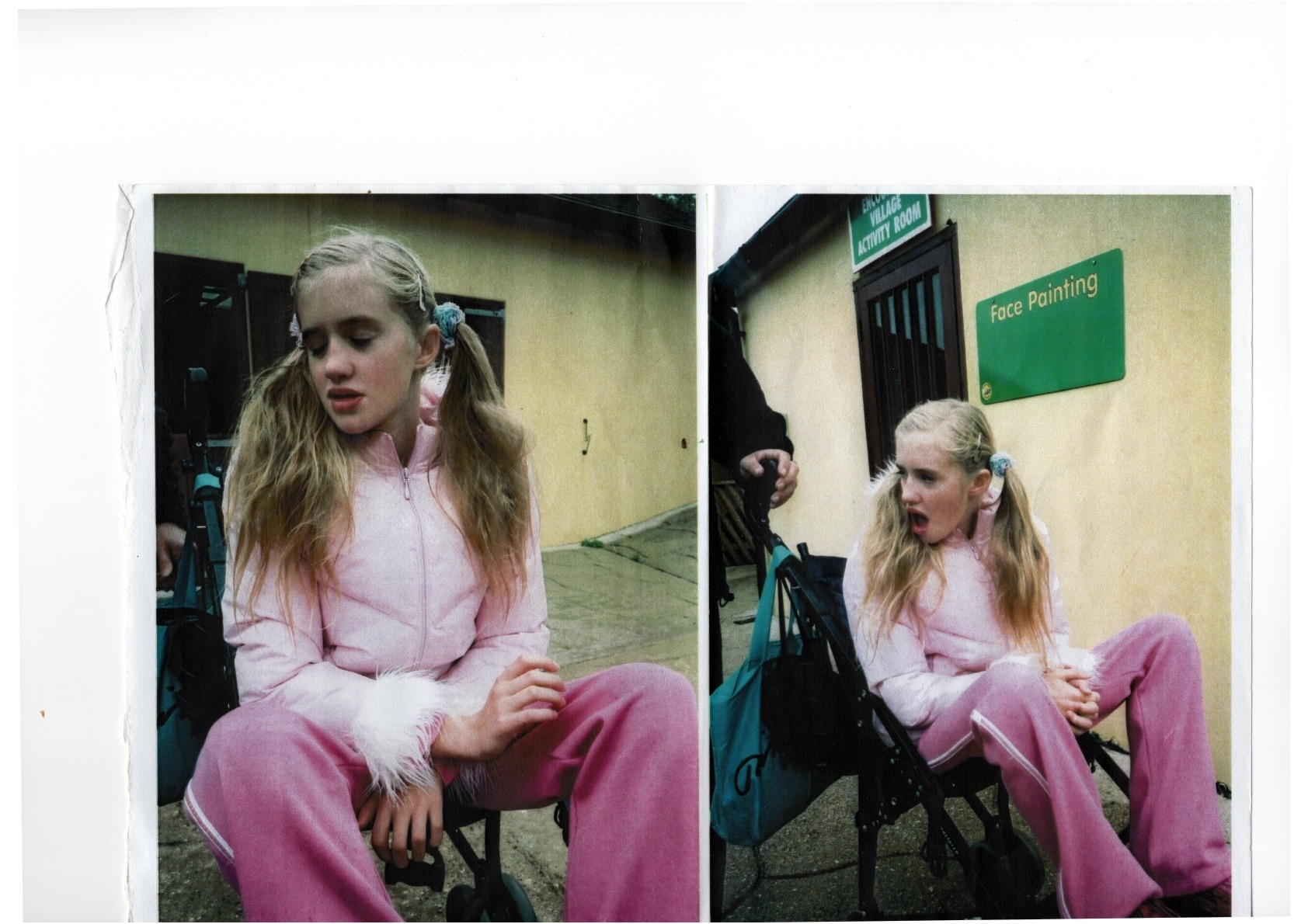 He continued his report by stating that in 2002, he was appointed as the Expert Medical Witness, by a firm of solicitors in an MMR litigation, and explained that the case involved approximately 1,200 vaccine-damaged children. However, the case was terminated by the Legal Services Commission (LSC) on the grounds that legal success for the claimants was unlikely.

Since then, he has witnessed literally hundreds of more cases and has been able to establish a clear clinical picture of seriously handicapped children. He explained that the list of injuries that he had witnessed was endless and he presented the list in full: 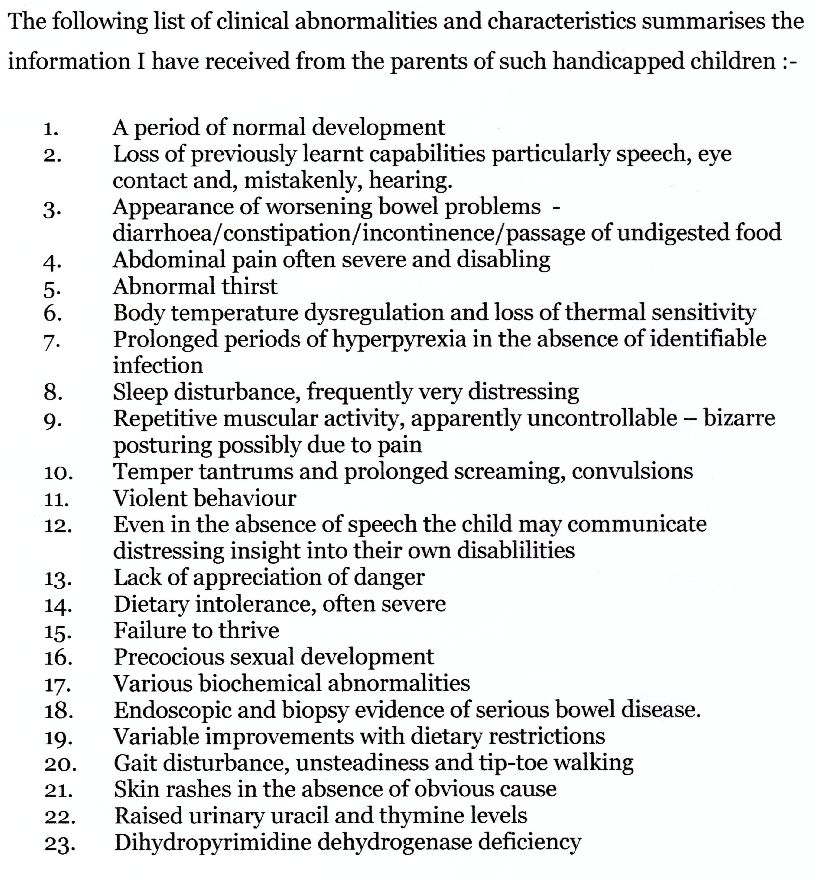 As you can see, this list is extremely extensive. Furthermore, Dr. Fletcher continued his report by stating that:

With this information in mind, it is difficult to understand why Jodie's case was dismissed. Especially when you consider the fact that Jodie suffers nearly every one of the conditions that were listed.

In his summary, Dr. Fletcher stated:

"Evidence fully supports Jodie's normal medical history prior to this administration of vaccines."

What makes the whole situation even worse is the fact that Dr. Fletcher was not the only professional to submit a report stating that Jodie was vaccine-damaged. However, despite the overwhelming evidence presented to the Vaccine Damage Payment Unit (VDPU) and the fact that no consent was given for Jodie to receive multiple vaccinations, this family has been left alone to struggle.

Maybe the reason for this can be found in a letter written by the senior case manager for the Legal Services Commission, Mr. John Baker.

(Note: MPA is the abbreviation for Multi-People Action.)

To which, Mr. Miller replied with the following statement, in an email to Mr. Baker:

This is probably the single most damning statement written by any of these professionals because he went on to state the following information in a letter to Mr. Baker:

Upon first considering our comprehensive letter of instruction, Dr. Geier confirmed that it may prove impossible to consider the combined effects of the alleged mixture of vaccines. There would be no documented study of how such a combination would react within a human body as it has never been accepted that it is appropriate to mix such vaccines together, such vaccines are already mixed by their manufacturers in a manner which is considered to be appropriate and safe for provision at the time. It is, therefore, clear that the original instruction of Dr. Geier has been unfulfilled as it seemed impossible to obtain appropriate evidence as to how such vaccines would have reacted together and reacted upon Jodie Marchant's body.

This was followed by another letter which stated:

Mr. Miller is absolutely spot-on with his account of this case because no consent was ever given for Jodie to receive a single syringe containing a mixture of several vaccines. Mr. Marchant stated:

The lack of consent should have been the obvious route to take. If it had been taken by our Legal Reps our case would have finished years ago. To ignore our consent refusal is criminal and an indication of the limits doctors will go to obtain their bonuses.

It is for these reasons that Mr. Marchant has decided to represent his daughter himself, with or without legal representation. He has told Health Impact News that he believes that it is about time that the doctor who vaccinated his daughter is held accountable for her actions.