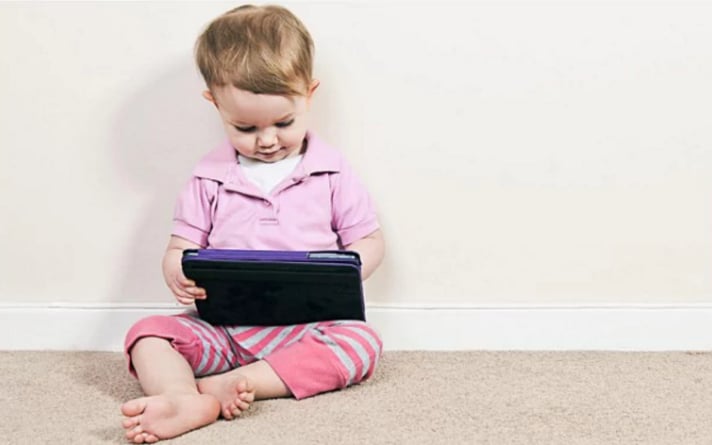 Children under 18 months should not be given handheld devices  CREDIT: ALAMY

Putting babies in front of iPads before the age of two stunts speech development, a new study suggests.

In Britain children under the age of three spend an average of 44 minutes a day using smartphones and tablets but it is the first time researchers have shown it can impact language skills.

Researchers from the University of Toronto and The Hospital For Sick Children in Toronto found that every 30 minutes of screen time increased the risk of delayed speech by 49 per cent.

Although guidelines exist for screen time, many parents do not realise that it also applies to handheld devices, the authors warn.By the age of two to three, infants should be able to communicate in sentences of between three and four words. But those who spent the most time on handheld devices were found to struggle with communication skills.

"While new pediatric guidelines suggest limiting screen time for babies and toddlers, we believe that the use of smartphones and tablets with young children has become quite common.

"This is the first study to report an association between handheld screen time and increased risk of expressive language delay."

The study involved nearly 900 children aged between six months and two years and was presented at  2017 Pediatric Academic Societies Meeting in San Francisco.

Dr Birken said all screen media should be discouraged in children younger than 18 months.

A recent study by University College London found that screen time can also impact the sleep of infants, and possibly harm brain development.

The British study found that every hour infants spent on such devices was linked to a 16 minutes less sleep.  Sleep is important for the development of the brain, especially during the first few years of life, when "neural plasticity" is at its greatest.

The researchers believe that  blue light from screens can affect the bodyclock, disrupting circadian rhythms while the stimulation caused by the content of the games or programmes can cause psychological and physiological arousal.

Tweet
Published in Articles
More in this category: « Anti-Geoengineering Letter You Can Use Free Christian Pastor Hassan From Imprisonment In Sudan »
back to top