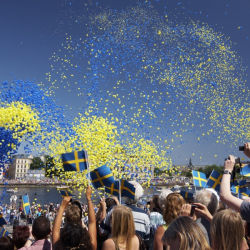 NOTE: Well say Adjo! to Sweden. Surely they are about to descend into a hellish pit of death and disease.... Skoal!

Sweden's Parliament just rejected 7 motions that would have promoted forced vaccinations. The Swedish Parliament decided forced vaccination policies are contrary to their citizens' constitutional rights. May every other country in the world follow their lead. Here is a rough translation of the article. Our Swedish speaking readers can find the original here:

Today, the Riksdag decided on the Social Committee's report 2016/17: SoU7, which contained a number of measures for public health. What prompted a large proportion of the population to monitor this particular case was that it contained several motions that would pave the way for both more vaccinations and forced vaccination. This was something that involved many, not just those who have opted for vaccine but also people who are vaccinated but who absolutely do not want to see any compulsion.

NHF Sweden sent a letter to the Social Committee, declaring that it would violate our grounds if forced vaccination, or mandatory vaccination as stated in Arkelsten's exercise. Many others have also sent in letters and many have called Social Affairs and Parliamentary Policy. Riksdag politicians have certainly noticed that there is a massive resistance to all forms of coercion in terms of vaccination.

The Social Affairs Committee prepared the questions on March 23 and arrived at its proposal on April 28, and the committee's proposal was that the parliament should reject the motions. Here you can access the Social Committee report: Report 2016/17: SoU7 (pdf, 812 kB)

Tweet
Published in Articles
More in this category: « Victims Of Vaccine Damage Can Sue Manufacturers In The US May 15 Mass Call-In To CA Senate Appropriations Committee »
back to top