Saudi Arabia Driving Ban On Women To Be Lifted

Source (3 VIDEOS ON THIS SOURCE PAGE WILL NOT EMBED): BBC News

Saudi Arabia's King Salman has issued a decree allowing women to drive for the first time, to the joy of activists.

The Gulf kingdom is the only country in the world that bans women from driving.

Until now, only men were allowed licences and women who drove in public risked being arrested and fined.

Praise for the move has been pouring in from inside Saudi Arabia, as well as around the world. US President Donald Trump said it was a "positive step" towards promoting women's rights.

Campaigner Sahar Nassif told the BBC from Jeddah that she was "very, very excited - jumping up and down and laughing".

"I'm going to buy my dream car, a convertible Mustang, and it's going to be black and yellow!"

The country's US ambassador, Prince Khaled bin Salman, confirmed that women would not have to get male permission to take driving lessons, and would be able to drive anywhere they liked.

He said it was "an historic and big day" and "the right decision at the right time".

Rights groups in the kingdom have campaigned for years to allow women to drive, and some women have been imprisoned for defying the rule.

Because of the law, many families have had to employ private drivers to help transport female relatives.

Saudi activist Loujain al-Hathloul, who was detained for 73 days in 2014 for flouting the ban, tweeted "thank God" following the announcement.

What was the reaction?

The move was welcomed by the US state department, which called it "a great step in the right direction".

Manal al-Sharif, an organiser of the Women2Drive campaign who has also been imprisoned for driving, said on Twitter that Saudi Arabia would "never be the same again".

The hashtags "I am my own guardian" and "Saudi Women Can Drive" quickly gained traction on social media.

You want a statement here is one: "Saudi Arabia will never be the same again. The rain begins with a single drop" #Women2Drive ❤️

Not everyone reacted positively, however, with conservative voices accusing the government of "bending the verses of Sharia".

"As far as I remember, Sharia scholars have said it was haram (forbidden) for women to drive. How come it has suddenly become halal (permissible)?" one critic tweeted.

Others emphasised that despite the latest development, Saudi Arabia remains a long way off gender equality.

Amnesty International's Philip Luther said it was "just one step", adding: "We also need to see a whole range of discriminatory laws and practices swept away in Saudi Arabia."

This decree is huge for Saudi Arabia. For decades now, Saudi women, many of whom are extremely well-educated and ambitious, have been waiting for their chance to participate fully in their country's economy.

For all this time families have had to stretch their budgets to the limit, as they have had to hire in imported chauffeurs from south and south-east Asia, house them, feed them and insure them.

An estimated 800,000 foreign chauffeurs currently ferry Saudi women around. The reason it has taken so long is the long-standing opposition from religious conservatives, who have expressed views varying from "they are too stupid to drive" to "it will lead to intolerable mingling of the sexes".

Yet this decree is in line with a programme called Vision 2030, promoted by Saudi Crown Prince Mohammed Bin Salman, to modernise Saudi society and bring it more into line with the rest of the world.

Saudi law enforces a strict form of Sunni Islam known as Wahhabism and is known for its gender segregation rules.

Women have to adhere to strict dress codes, must not associate with unrelated men, and if they want to travel, work or access healthcare they must be accompanied by - or receive written permission from - a male guardian. 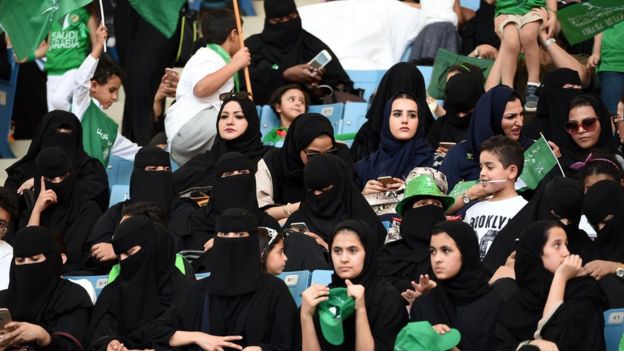 The kingdom recently faced a backlash from conservatives on social media after allowing women to participate in Saturday's National Day celebrations for the first time.

The festivities included fireworks, light shows and a concert in King Fahd International Stadium in the capital, Riyadh.

Tweet
Published in Articles
More in this category: « Interview At Houston FEMA Camp – Red Cross Rip Off – No $400 Checks Baby Foreskin Is Being Used To Make Vaccines »
back to top