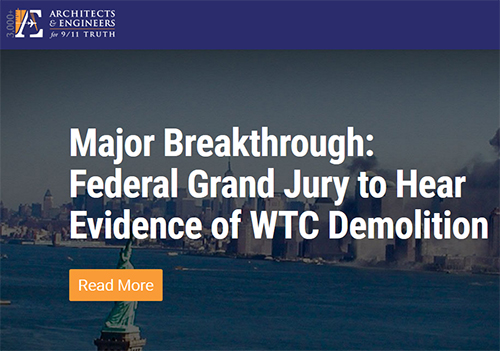 I remember walking into my living room almost 18 years ago and seeing on a "news" broadcast (I still had a television back then), repeating videos of airliners crashing into skyscrapers in New York. I realized it wasn't an action/adventure movie, but real-life events that had just taken place. My investigations into the Deep State were just beginning, and I did not see what should have been obvious to any observer. The towers could not have been collapsed like they were, let alone practically vaporized, by the impact or fuel of airliners. Not only were they specifically designed to withstand that impact, but they were built with such massively powerful steel reinforcing, that they could only be brought down by controlled demolition. Explosives had to be professionally placed throughout the buildings in a job that would have lasted months. I watched George W. Bush's sincere speech of compassion for the victims. I did not realize until later that his scripted speech was a lie, and a justification for attacking pre-selected countries in the Middle East, to further a deeper agenda.

All this is not to mention Building 7, which collapsed like the other two, even though no aircraft hit the building at all. Later it emerged that people had been warned on the street that Building 7 was about to be demolished, just before it fell. The whole event was so obviously staged, it is amazing any of us ever fell for it being anything other than one of the most important false flags in world history. The wars and crackdown on the rights of people were in place and ready to go, before the event.

Over the years since the crime of 9/11 which killed thousands of Americans and "justified" undeclared wars in the Middle East that killed more than a million in Iraq alone, and which also resulted in the rise of a severe police state situation in the U.S., brave individuals and organizations have been working hard to uncover the true description of what happened. Finally there is a major breakthrough in this long project for disclosure, and some of the key players in this big development are joining us on the show to explain what has happened.

Richard Gage, who founded Architects and Engineers for 9/11 Truth (www.ae911truth.org) has been one of the main forces working for disclosure since 2006, originally proving the towers could not have been destroyed by the aircraft that hit them or by spilled jet fuel.

Barbara Honegger is an officer and board member of Lawyers Committee For 9/11 Inquiry (www.lcfor911.org). Dave Meiswinkle is the group's president. This organization is directly responsible for bringing a highly researched and documented petition to the attention of the U.S. Attorney for the Southern District of New York, demanding the attention it deserves.

In response, the U.S. Attorney has agreed to convene a special criminal grand jury, investigating what really happened on 9/11. The petition comes with a massive amount of evidence that cannot be ignored. What will result from this inquiry could be of great historic importance. True exposure of what happened on 9/11 would shine light on many other activities and crimes of the Deep State, and could change the fate of life on our planet. All three of the key players mentioned here have agreed to appear on Lost Arts Radio together, this Sunday.

Join me, your host Richard Sacks, every week for fascinating discussions, amazing guests and useful information that you will not want to miss. If you want to support our work, please use the Donate button on our website, www.lostartsradio.com, and tell others about the show. Also, when you shop at Amazon for anything, instead of going to their usual website, go to smile.amazon.com. You can do all the same shopping at exactly the same prices. But 1/2% of what you spend goes to help our work. It will ask you what IRS-approved non-profit you want to support, and just choose Lost Arts Research Institute in Arizona.

In addition to the Sunday shows and livestreams that introduce you to inspiring people and projects (www.lostartsradio.com), we are also entering our second year with Planetary Healing Club (www.planetaryhealingclub.com). PHC is a private, members-only platform, a supportive and interactive environment where I can speak with you freely about information that would be censored on the usual public platforms where most of our audio and video presentations are found. PHC is for you, when you're ready to really get deeply into special self-healing protocols and start transforming your life for the better. I'm there live to meet and talk with you every week. It's interactive, with live chat and plenty of time for Q&A, comments and any input you want to contribute. It's a rare opportunity for those ready to experience a radically better quality of life, and willing to do the work on themselves to make it happen. Learn more about it at www.planetaryhealingclub.com.

Finally, don't forget our news show on national and world events, for one hour every week at 7:30pm EST / 4:30pm PST, called Lost Arts Radio Live (www.lostartsradio.com/live). It's where we look at some events of the past week, and what the significance is for your life and for the future of our world. After "Lost Arts Radio Live" is a half-hour break, followed by our weekly meeting of the Planetary Healing Club, which you can join for a minimum donation of just $25/month at www.planetaryhealingclub.com. Meet me there when you're ready to transform your experience of life for the better.